The U.S. Dollar Could Be Nearing Its “End Game” 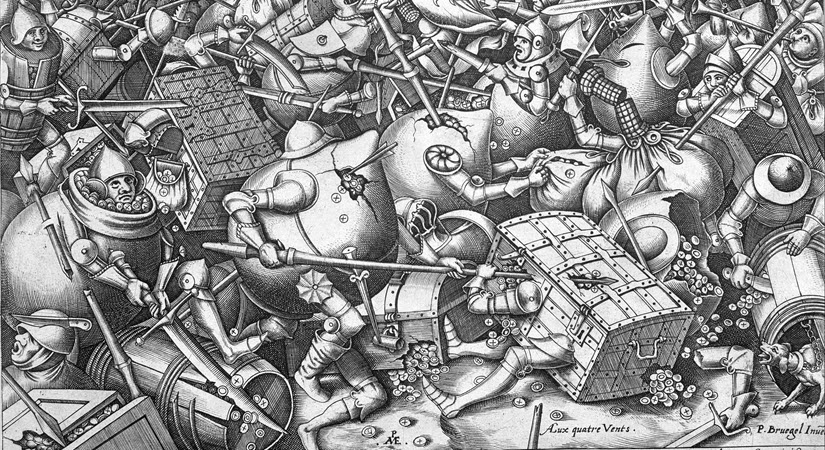 From foreign countries trying to dethrone the dollar’s hegemony as global reserve currency, all the way to rising inflation weakening it… the U.S. dollar is in trouble.

Pundits like Jim Rickards said (back in 2016): “The dollar won’t lose its reserve currency status overnight” — and he was right. But a new and disturbing signal could finally be revealing the end game.

You can see the dollar’s loss of about 10% value against other currencies and its persistent downward trend since March 2020 reflected in the dollar index chart below: 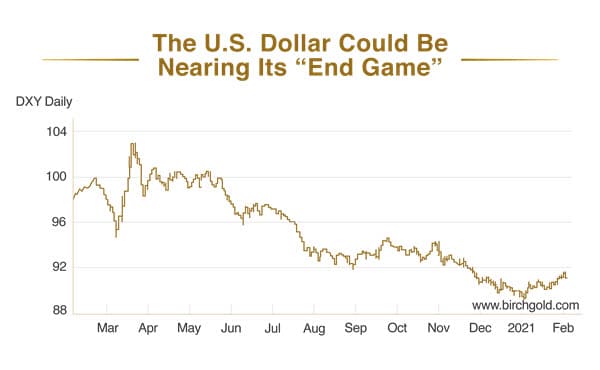 In fact, one forecast reported on Bloomberg in June 2020 called for a 35% decline in value by the end of 2021, which would leave the dollar index at 65. If that plays out, the index would be reporting its lowest value in at least 35 years.

In addition, a new Bloomberg report gave three reasons why the “dollar is now trading at the lowest level against its peers since 2018”:

1) Sharp widening in the U.S. current-account [trade] deficit.
2) Rise of the euro.
3) A Federal Reserve that would do little in response to any weakness in the greenback.

There is no doubt the trade deficit is a problem. According to the Bureau of Economic Analysis, the gap between imports and exports is at its widest since 2006. That won’t help the dollar recover.

The Fed’s inflation policy isn’t likely to help the dollar much because it “printed” itself into a corner with its loose monetary policy. The same Bloomberg piece further clarifies the Fed’s inflation strategy:

By adopting a new ‘average inflation’ targeting regime in August, the Fed has sent a strong signal that it will move later rather than sooner to counter any surge in inflation rates. [emphasis added]

That leaves the euro, cryptocurrencies, and other alternative currencies as possible stores of value should the dollar take a dive.

But the Alternatives Don’t Look Much Better

The euro to USD exchange rate currently sits close to $1.19, and seems to be returning to 2017 levels (below $1.08) after a sharp downturn since the beginning of 2021. Furthermore, although the European Union does have its own central bank, it doesn’t have a unified fiscal policy. (Remember Greece? Cyprus?) For these reasons, the euro doesn’t appear to be a great alternative.

Then there is the yuan, which the U.S. Treasury has accused China of manipulating, after their central bank intervened and allegedly weakened it during trade war disputes. Will China engage in similar currency manipulation in the future – further weakening the U.S. dollar or euro to keep its exports cheap? Given China’s past behavior, it seems more probable than not.

Finally there are cryptocurrencies, another alternative to the dollar. Although bitcoin and other digital currencies are attracting greater institutional interest, they’re extremely volatile. Some reasons for this could be lack of central regulation and absence of fundamental value.

So overall, if the U.S. dollar index takes a dive, these alternatives don’t appear to be stable enough to help. But there’s an asset that’s stable, always in demand, and fundamentally valuable…

Gold and Silver Have Withstood the Test of Time

The dollar appears to be heading for its “end game” as global reserve currency, and several popular alternatives don’t look much better. The good news is that both gold and silver have thousands of years of history behind them. You can’t print more gold, and physical precious metals aren’t subject to a central bank’s or government’s whims. The value of precious metals is intrinsic, and, even better, gold and silver are extremely liquid.

Now is your chance to get in front of the dollar’s last days. If the dollar were to become close to worthless, your buying power goes out the window with it. Precious metals can help preserve the value of your savings by acting as a store of value and protection against inflation regardless of the games central banks and governments play.

The U.S. Dollar Could Be Nearing Its “End Game”