The Fed’s Huge Income Statement for 2021 Is Out: Where its Revenues Came from and Where They Went 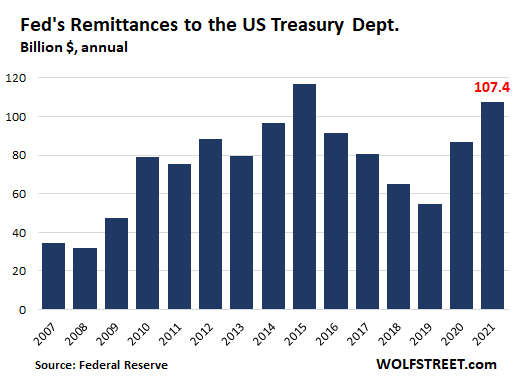 “Net income” is a bizarre term for an organization that buys trillions of dollars of securities with money that it itself created.

By Wolf Richter for WOLF STREET.

The Federal Reserve’s balance sheet is a gigantic pile of assets on one side and liabilities and statutory capital on the other side. That balance sheet, which is released weekly and which we discuss frequently, generates a lot of income and a lot of expenses. In addition, the Fed gets income from fees. It has a ton of operating expenses. It pays dividends to its shareholders. And it remits to the Treasury Department what’s left over. The Fed discloses all this annually in its financial statement.

For what it’s worth: The Fed’s audit firm, KPMG, has been entangled in innumerable scandals – such as using stolen regulatory information to cheat on audit inspections – and massive audit failures, such as of UK outsourcing giant Carillion, which suddenly collapsed at the beginning of 2018. So there’s nothing to worry about.

The Fed is a very profitable organization. For 2021, it reported “net income” of $107.8 billion. But the Fed’s term “net income” is somewhat bizarre for an organization that buys trillions of dollars of securities with money that it itself created. But OK, we’ll go with the flow.

The Fed doesn’t pay income taxes, but it remits nearly all of its “net income” to Treasury Department, as required under the Federal Reserve Act.

By comparison, Apple booked a pretax income of $109 billion in its fiscal year 2021, just ahead of the Fed’s $107.8 billion. Apple’s auditor is Ernst & Young, which is tangled up in its own long series of scandals and audit failures.

The Fed paid $583 million (with an M) in statutory dividends to the shareholders of the 12 regional Federal Reserve Banks. The amount represents about 0.55% of its net income. These 12 FRBs include the New York Fed, the St. Louis Fed, the San Francisco Fed, the Dallas Fed, etc. Their shareholders are the largest financial firms in their districts.

Nearly all of the net income was “remitted,” as the Fed calls it, to the Treasury Department, as required under the Federal Reserve Act. The $107.4 billion for 2021 was the second-highest amount, behind the record in 2015.

In 2018, the remittance of $65.3 billion included $3.28 billion “capital surplus,” as required by Congress under the Bipartisan Budget Act of 2018 and under Economic Growth, Regulatory Relief, and Consumer Protection Act of 2018, to bring the capital surplus down to $6.825 billion.

For 2021, the $107.4 billion remittance included 40 million to reduce the capital surplus to $6.785 billion, as required by Congress under the National Defense Authorization Act for 2021.

The Fed’s Huge Income Statement for 2021 Is Out: Where its Revenues Came from and Where They Went